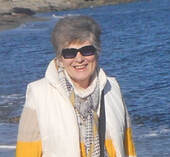 Childhood and Family Origins
I was born in the village of Dronfield Woodhouse, Derbyshire, England, the only daughter of Mollie Kinrade Shirt and John Dethick, bass-baritone. In my childhood Dronfield Woodhouse was just a small village, consisting mainly of stone cottages and farms. Social life revolved round the Miners' Welfare and the Methodist Chapel. Most of my mother's family had been miners at sometime in their lives, going back as far as 1845, when great great great grandfather John Maskrey was killed in a roof fall in the newly-opened Booker's Pit. Great great grandfather John Shirt's name is to be found on one of the foundation stones of the porch of the Methodist Chapel, added on to the original 1849 building in 1875, and his great great granddaughter, my mother, was organist there for over sixty years until its closure in 2009.  As children we roamed through the woods and fields enjoying a freedom today's children can only dream about.  One of my favourite haunts was Kitchen Wood, which is shown above.
I am very proud of my Derbyshire origins and have written two books and a pamplet about my family.  A History of the Dethick Family of Dethick 1200-1918 describes my father's family, which originated in Dethick, Derbyshire.  A Line of Shirts describes the vicissitudes of my mother's family, typical of those whose rural environment was shaken by the Industrial Revolution. The pamplet, Cowley Bar 1841-1901, uses information from the Census returns to describe life in the small hamlet in the parish of Dronfield where my Manx great great grandmother, Jane Shirt neé Kinrade, was Toll Bar keeper in 1871.
Education and Career
Between 1955-1962 I attended Dronfield Henry Fanshawe School, where I was head girl from 1961-2. From there I went on to Bedford College, London University, where I read Geography with subsidiary History,  graduating with an Upper Second Class Honours degree in 1965. Having decided that I wanted to teach, I returned north to Sheffield University where I obtained my Diploma in Education with distinction in theory.  For the next twenty-eight years I taught on Merseyside, in Derbyshire and in Sheffield under my former married name of Boyce. The last six years of my teaching career were spent at Norton College (later the Sheffield College) where I held the post of Senior Lecturer in Humanities. In 1987 I won a bursary to study Italian at the Scuola Leonardo da Vinci in Florence and in 1992 was admitted to the Institute of Linguists, London. Italian was my main teaching subject for the latter years of my career.
Italy
In 1995, after taking early retirement,  my former husband David Boyce and I set up a small travel company, Etruscotour, which operated from Castiglione del Lago, Umbria, where we already owned a property. We ran the tours until our separation in 1997. We also managed holiday properties and it was during this period that I met a former Australian airman, Jack Doyle, who had been injured in a delayed bomb attack on a villa in Umbria during the Second World War.  I also collaborated with Steve Emmett, of Brian French and Associates, in assisting his purchasers in setting up their domestic utility contracts, and I finally retired from both these activities in 2004.

At about this time Judy Lugowski and I opened the English Language Library in Sanfatucchio in a small upstairs room of the Circolo PD.  When the space became  restricted - we had to share the room with a large refrigerator - we were pleased to be able to transfer the book collection to the Biblioteca Comunale of Castiglione del Lago.
World War 2
My encounter with Jack Doyle changed my life, as listening to his experiences led me  to investigate what happened during World War Two in the area around Lake Trasimeno. My first book, The Trasimene Line. June-July 1944, was published by the Uguccione Ranieri di Sorbello Foundation, Perugia, in 2002. The Italian translation, La Battaglia Dimenticata. Giugno-Luglio 1944, was awarded the Special Prize in the 22nd National Awards for History texts 'G.Grifoni' (Accademia Masoliniana, Panicale, Umbria), in 2005.  Whilst collecting  testimonies for the Trasimene Line I learnt of the internment camp for Jews and political prisoners which had been set up in February 1944 on Isola Maggiore, one of the three islands in Lake Trasimeno. The results of this research are to be found in Gli Ebrei di Isola Maggiore (Italian only), my novel An Honourable Man, both published by Lulu.com in 2011.

I am  still involved, though to a lesser extent,  in enabling the famillies and friends of the many young soldiers who lost their lives on the Trasimene Line to find out more about the circumstances in which they died.  To this end I have two websites:orvietowarcemetery.weebly.com. and assisiwarcemetery.weebly.com.  I have another website relating to Umbria, which deals with the bombing of a prisoner of war train by the United States Army Air Force on 28 January 1944 as it crossed a bridge over the River Paglia near Allerona.  On the train were about 800 allied priseorns of war.cbombedpowtrain.weebly.com.

In order to commemorate the 70th anniversary of the passage of the front in the Comune of Cortona I  translated from the Italian the war-time diaries of the village priests and other testimonies, which were put together by Pietro Pancrazi and  published in 1947 as 'La Piccola Patria'.  I have added the relevant pages of the War Diaries of 4 British Infantry Division, 78 British Infantry Division, 6 British Armoured Division and 1 Canadian Armoured Brigade.  The result is a book 'Cortona 1944'  published  by the  Uguccione Ranieri di Sorbello Foundation, Perugia

I have conducted a piece of research on the British submarine Saracen, scuttled off Bastia Corsica by her captain, Lt. Michael Geoffrey Rawson Lumby,  after being depth charged AT 1 AM ON SATURDAY 14 AUGUST by two italian corvettes, Minerva and Euterpe. (THE TIME AND DATE IS THAT GIVEN BY THE CAPTAIN IN HIS OFFICIAL REPORT DATED 13 MAY 1945.) All but two of her crew survived, were taken prisoner by the Italians and brought to mainland Italy, where after the Armistice of 8 September the ratings were led out of  their camp at Manziana by Capitano Mario Cuneo, who split the prisoners up into small groups with maps, compasses and food, providing directions on how best to reach  the Allied lines.  Whilst many were recaptured and sent to Milag und Marlag Nord in Germany to join their officers, some remained free until the arrival of the Allies in the summer of 1944.  With Anne M. Corke, daughter of ERA Bill Morris, I have written a book about Saracen named 'Twixt the Devil and the Deep Blue Sea' and have set two  websites powcampmarina.italy.webador.com and p-247submarinesaracen.webador.com

I have now finished researching what happened to Allied Prisoners of War in Umbria after the Italian Armistice on 8 September 1943, and am particularly interested in two camps  - PG77 at Pissignano in the commune of Campello sul Clitunno and PG 115 at Morgnano near Spoleto together with its satellite camp PG115/3 at Marsciano.  The result is a book entitled The Long Trail Home available from Lulu.com.  The ITALIAN version, published by Morlacchi University Press, Perugia, under the title La Lunga Via del Ritorno came out in December 2018).

AND
airmenpowsitaly.weebly.com which deals with  the interrogation camp for airmen which was located in the Convento di San Valentino at Poggio Mirteto north of Rome.

My  interest in the Commonwealth War Graves Commission Cemetery at Rivotorto Assisi led to the publication of  a volume in ITALIAN entitled Il Cimitero di Guerra di Assisi.

My latest publications:
- As If He Were My Brother.  A translation of the requests for recognition presented in May and June 1945 to the Allied Screening Commission by the citizends of the Italian region of Piedmont who had helped the escapers from the POW camps in the area. SEE PUBLICATIONS  PAGE
- a publication entitled Some Corner of a Foreign Field available from the publishers Austin Macauley or from Amazon